An Ode to Christmas


It's Christmas week, the countdown's on
Til Santa's on his way
With lots of gifts for girls and boys
All loaded on his sleigh,
The kids are filled with Christmas cheer,
Excited by the season,
While mums and dads rush everywhere,
And shopping is the reason,
For all the family and everyone's friends,
Teachers and neighbours too,
Houses to clean and turkeys to buy
So very much to do
And panic, panic, rushing on,
Becomes the assumed position,
No lack of money or shortage of time,
Can thwart the Christmas mission,
All must be perfect in every respect,
And new traditions made,
Such pressure on all, to get it right,
Not enough attention paid,
To remember the things that matter most,
During this special time of year,
That we're surrounded by those we love,
The people we hold dear,
No shop bought gift, or internet bargain,
A person's place can take,
Around the table or on the couch,
And so for happiness sake,
Just take a breather, enjoy the moment
Engage in lots of niceness,
If you have good health and people to love,
Then your Christmas gifts are priceless. 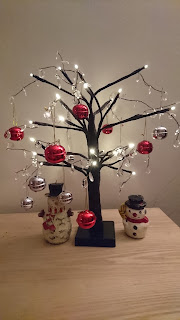 Winter is well and truly here. Along with the usual festivities in the build up to Christmas, it has brought to this house a dose that strikes fear into the heart of any parent of boys. Man flu has arrived with a bang.

Man-flu is making its presence felt with a vengeance. Much as I love my darling sons, I’m afraid there are no warriors among them.  My daughter managed to catch, just a cold - lucky her, but the boys have been struck down so badly with this cursed dose, that any attempts to encourage movement from their slumped position on the couch brings about the sort of whines and moans that are associated with this terrible, prohibitive illness.

According to the six year old, it’s my fault that he’s sneezing because I gave him peas instead of beans yesterday.  I’m also responsible for his teacher having caught his sneezes because of my insistence that he bring a tissue to school – apparently the mere sight of it set her off “astishoo-ing”.

I’m trying not to take any of this to heart.  Confusion is one of the side effects of this illness. The three year old, also suffering – and definitely not in silence, has become confused as to how the sponge ended up down the toilet.  The ten year old has no idea why his dirty socks keep piling up on the floor of his bedroom, even though he DEFINITELY put them into the wash basket. The seven year old is confused as to how he has managed to come home in a pair of school shoes that are three sizes too big for him and have laces – which he can’t even tie! The twelve year old is confused as to why he must go to the school having sneezed twice at this stage and so obviously therefore, very much in the throes of it. The one year old is blowing snot bubbles from his gorgeous button nose at a very impressive rate.  He’s not confused at all – he knows he’s miserable and he’s letting us know all about it.

Begone man-flu– leave my poor boys alone. I’m not sure how much more of their “suffering” my female self can endure! 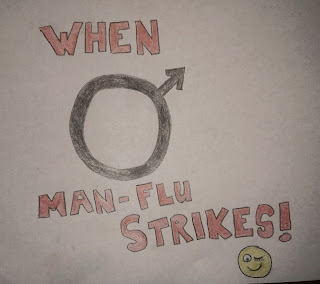