A few days home and the kids still can’t quite get their heads around the fact that it’s back to reality time. All talk is about how cool it was to have a swimming pool in our “back garden” (we stayed in a complex), how great it was to have ice cream after breakfast and how awesome it was to meet lizards on our walks – not all of us were as convinced of this awesomeness.

The adventure began very early in the morning with a little after 3am drive to the airport. Teeing us up nicely for the holiday, it was lashing rain. Orders were dished out en route about staying close to each other and the need for assistance from older children to get suitcases and troops safely to the check in desk. At the desk the attendant painstakingly went through nine passports (definitely sniggered at mine) and we gratefully handed over our scaled down but nonetheless, significant amounts of luggage. Then it was onwards through security where my confused 12 year old was randomly chosen for swab testing.

And then the fun began, shops to browse, planes to view out the window and excitement levels soaring. Squeals of delight were heard from our rows as the plane took off and the children were finally flying. Ever the pragmatist, the curly haired one wanted to know “how does the plane stay in the sky – it’s not flapping its wings”? My aeronautical skills a little rusty, I placated him with “the engine goes very fast”.

Thankfully, the younger two children fell asleep for a few hours on the flight, making the journey a lot more pleasant for everyone. “This is so cool” may have mentioned, once or twenty times by the eight year old and a game of musical seats mid-flight meant that everyone got a chance to look out the window. The approach to Lanzarote was surreal. The island seemed to appear out of nowhere and it looked as if we might land in the sea. Once we were down, excited kids couldn’t wait to explore their new surroundings. 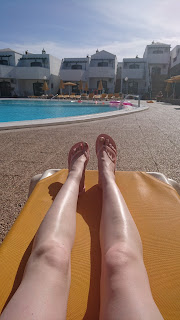 The heat, accompanied by a warm but refreshing breeze was lovely and was in complete contrast to the conditions we had left behind in Dublin. A short coach trip later, during which the three year old made himself known to absolutely everyone on board, we arrived at our destination - a lovely, though, worryingly quiet, resort that was alerted to our arrival within moments.
Within minutes, cases were parked in the apartments, swimwear was located, and previously “starving” children, suddenly felt a dip in the pool was more of a priority than lunch. As elderly couples sunbathed by the side, several of my troops launched themselves into the pool, cannonball style.

I worried that the older residents might not appreciate the invasion of so many enthusiastic and excited children. My worries were unfounded. Curiosity turned out to be the main reason so many sat up and watched the children at play – “are they all yours?”, was a question that I heard frequently.
So with a three year old keen on notoriety, we came to know many people over the course of our stay. On the day of my son’s birthday, one couple stopped by with sweets for the birthday boy. Another arrived with a giant chocolate cake to assist the celebrations. The kindness and thoughtfulness of others, just made our holiday even more special. 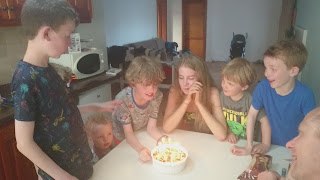 But there were plenty of typical and atypical moments too. I can’t pretend - in many regards it was just chaos in a different location, but that different location made all the difference.
We walked along paths admiring trees “that looked like giant pineapples”. Lizard watch, was another favourite pastime and when we encountered one, the excitement was unreal. They’re smaller than I imagined, but they fascinated the children nonetheless. I think it’s a “macheleon” (chameleon) the six year old said. The three year old meanwhile, thought we really should try to catch one, because Miss Sharon (his Montessori teacher) would definitely love it.

Back in the apartment, my underwear avoiding son, bounced starkers on the bed, waving at poor and unsuspecting passers-by, because some things stay the same, no matter where you are. Another child alerted all pool siders to the change in his bowel habits. “I haven’t done as many poos on this holiday, but I have had lots of ice cream” he loudly declared.

But on the final night, there was murderous intent – and murderous activity. My eight year old is a gentle soul, who takes the phrase “wouldn’t harm a fly” to a new level. During a game of charades, something moving caught our eye to the side of our apartment. It was a cockroach – and a bloody big one.  My brave husband set about ridding the apartment of it, but the eight year old was in the cockroach’s corner. “Run away cockroach, run – quick get away, he called” as my hubby plodded after it.

The cockroach lost, and the floodgates opened. Devastated the eight year old sobbed, and spoke of the cockroach’s family who would be wondering where he was. Inconsolably he took his father to task over his cruel and unnecessary actions. I did as any good, and extremely relieved that the cockroach was dead, mother would do – I agreed with my son. “He shouldn’t have done that love, you’re right”, I said. “I’ll make sure that he never kills another cockroach again”, I added, desperate to stop the tears flowing. “It’s too late for that one though” he sobbed “he can’t come back to life”. The curly haired one put his arms around his brother in comfort “Only Jesus can come back to life”, he explained – “and only if it’s Easter”.

The last morning saw final goodbyes to those we’d met and a sadness about leaving a place which had been the source of so much fun and happiness for the week. In true “us” style though, we left in much the same manner we arrived. As we made our way to reception with fully packed cases, to board the transfer coach, our eleven year old splodged towards us, having been pushed into the pool fully clothed, by his three year old brother. Never ones for a quiet entrance, it seems we weren’t ones for a quiet exit either! 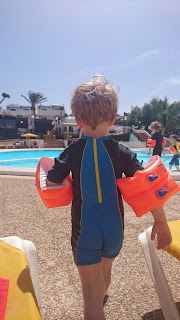 How could it be anything else?

And so it came. After the chaotic preparations and frantic efforts to clear the mounds of washing and tidy the house for the Communion celebrations, the day arrived. While the clean washing found a home, that was relatively temporary granted, although the danger of out of sight, out of mind has been known to linger here, and the house was cleaned from top to bottom – and uncleaned by the trailing three and one and a half year olds, nothing mattered that morning when my shiny eight year old son, bounced out of bed, beamed at me and said “mum it’s today”.

And that smile lasted all through the morning preparations and the hurried dressing of every member of the family. It stayed as he belted out the hymns in church and reached across to hold my hand excitedly. It widened further as he watched the magician with his classmates in the parish centre afterwards, organised by the parents association at our school. And it was still there as he greeted each relative with a little-person-sized bear hug and a thanks for coming to share his special day.

And I realised that all my efforts to make the day perfect, were unnecessary, because it was always destined to be so. It was about him, it couldn’t but be perfect. 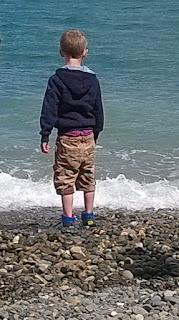 It’s finally arrived. A day that the last few months and weeks have all been about reaching. A day that I think my children have been looking forward to even more than me. A day that means I won’t have my head buried in the laptop at every available moment, night and day – to the same degree anyway. A day which means that I can start to join my kids at the park again, rather than over enthusiastically waving them off with their father, to the chimes of “don’t rush back” just so that I can get a chance to work in peace.

A few months ago, I was given this wonderful opportunity to write a book, all about my favourite topic – parenting. In my delight, I pushed the workload to the back of my mind, and focused on the fact that I had loads of thoughts on all things parenting and plenty of inspiration in the forms of mini and not so mini-mes, who were as varied in their personalities as their views on underwear and its necessity. I just needed to get it down on paper – how hard could it be?

Very - is the answer. Life kept getting in the way and in spite of the important and significant sized project that I had undertaken, the kids insisted that I continue to look after them, feed them, bathe them, help them with their homework, attend one’s confirmation, another’s school musical, and a child had a stint in hospital for good measure.

But now, today, I HAVE FINISHED MY BOOK!!!! I have pushed the send button and the electronic copy is winging its way to my editor. As I typed those immortal words “The End” - I felt like Daddy Pig as he contemplated the muddy puddle before him. I was and am at one with the world again.

So if you’re looking for me, you will find me sitting on the couch with a celebratory glass or several of wine, eating copious amounts of chocolate to compliment it and beaming like that proverbial cat.


And who cares if tomorrow is a school day because I have finished my book – until my editor comes back to me at least. 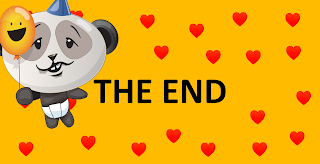