I can’t quite believe the mid-term is over already. Granted the primary and montessori schoolers only had two days off but the teenagers had the full week, and even that seems to have gone by in the blink of an eye. And after a lovely, albeit rainy, afternoon spent at the beach, I’m finding, as Sunday night comes around again that I’m taking the ostrich approach to the uniform situation – well for an hour anyway – as I remain in denial about the task in hand. There’s a certain dread fills me going into the week ahead, and I swear I feel it more than the kids.

It’s not that everything was perfect last week. In fact in spite of having three teenagers in the house (my daughter’s pal stayed over) a phone call to a radio station nearly went horribly wrong. As I went on air to discuss a suitable tax-funded childcare solution, the two and four year olds antennae went up – mum was missing and needed to be tracked down immediately. And track me down they did to the youngest’s bedroom, which incidentally is there purely for decoration as his favourite place to sleep is firmly beside me – and not as much as a centimetre apart. However in spite of his lack of familiarity with his supposed designated sleeping area, he and his big brother found me and proceeded to pound on the door.

“Mum we need to see you. Mum were are you, I did a poo!” came the indignant call from little voices as I kept my foot pressed firmly against the door.  As I answered the radio host’s questions and tried to keep my focus, I felt sure one of the teenagers would come to my rescue – they knew what I was doing after all. But no, t’was not to be and the attempts to break into me continued.

When the call came to an end I went to investigate what possible terrible fate had befallen the teenagers in my house to have allowed such a thing to happen. It turns out “Back to the future” and the online pursuit of Longitude tickets had caused them to lose all awareness of their surroundings and had resulted in a temporary loss of their hearing.

On the plus side however, there was no homework.

But we’re back to normality tomorrow and so without any more ado or further digression, here’s my top tips to making the school week more harmonious and altogether lovely!

1.       Leave out everything the night before – every. single. thing. Shoes, jocks, socks, change needed for the next day, spare football boots, drama folders etc . Don’t believe any child that tells you something in this category is in a particular place without seeing proof! Failure to do this will inevitably result in the discovery that a shoe or something equally important has disappeared from the face of the earth just as you’re about to leave the house. Such a discovery is likely to send you into fishwife mode – which is neither a harmonious or lovely start to the day for anyone, especially you.

2.       Make the lunches the night before – I know they taste nicer if they’re made that morning, but the time saved is invaluable when you’re already under pressure.

3.       When it comes to homework, choose your children’s seating arrangements wisely. Know which pairings work best and don’t be tempted to veer from them  - and get all bathroom stops, snack requests and general avoidance tactics out of the way beforehand to give the children as straight a run as possible at the task in hand.

4.       Set an age appropriate amount of time for your children to complete their homework within, and stop them when that time is up! It’s hard to know sometimes whether daydreaming or quantity is the cause of some children spending so long doing their homework. Consistency with a set time approach should make it obvious pretty quickly. If you feel quantity is the problem then consider prioritising your child’s homework for them. If for example they have 10 questions to complete in one subject, getting them to do questions 2,4,6,8 and 10 should offer a good balance in terms of scope and progressive difficulty, rather than 1,2,3,4 and 5.

6.       Get a wall planner/ calendar for your fridge and keep it up to date so that you and the older members of the family can see at a glance what commitments you have for the week

7.       Remember that the evenings are yours to enjoy as well – not just the weekends. There may be lots to do, but make taking the time to chill a priority also.  Sometimes it’s just necessary to park the non- essentials. We’re all living in a time-poor society but all work and no play not only makes Jack a dull boy but also leaves Jacqueline feeling frustrated and overwhelmed.

8.       Leave your own clothes out the night before too – it’s a surprising timesaver. And get up, get dressed and have breakfast before the kids too. It’s so much more relaxed than the alternative of being called to mop up juice while you’ve just one leg in your trousers. 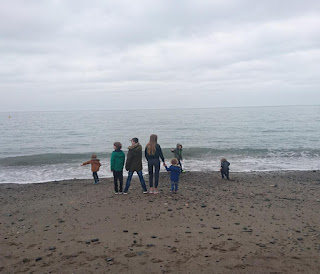