An Ode to Mother's Day


It comes around just once a year,
A day of celebration,
And recognition of all that mums do,
Beginning with creation,
Though granted, they didn’t do it alone,
The dads made a contribution,
But it’s not the men who are pregnant 9 months
Coping with added weight distribution,
Till the end of gestation when baby emerges
Through a design, quite flawed by dimension
Think melon and nostril and you’ll get the picture,
And the pain’s probably also worth a mention,
Or out through the tummy, a passage created,
With the flick of the surgeons sharp knife
Means a longer recovery, but baby’s here safely,
And the scar fades a lot through your life,
The sleepless nights follow, the boobs grow impressive,
To proportions never imagined before,
And the nappies keep coming, and the teething and tantrums
Toddler terrors, threenagers and more,
Cut knees to be treated and bumps to be kissed,
The scrapes keep a coming no matter
As the walls they are scaled and the trees, just a challenge,
And your furniture is left all a tatter,
Redesigned kitchen walls, and phones down the toilet,
Surprises, you find every day,
Need to hide all your treats, cos the kids they can sense them,
And eat them all, much to your dismay,
Then there’s homework and projects, all needing attention,
But kids are resisting so much,
And you feel you’ll go crazy, as battles continue,
Over English and Maths and all such,
But on mothering Sunday, all is forgotten,
You’ll think of how lucky you are,
When the cards are presented, and the pictures drawn carefully
Loving messages sent from afar,
Cause no matter our age, or the age of our children,
A mum knows how lucky she is
Though the hours are long and the terms need some tweaking,
We know being a mum is the biz.
Still on mothering Sunday, appreciation is welcomed,
And mums could all do with a rest
It’s just twenty four hours in a very long year,
So enjoy it mums, cos you’re the best!
Posted by Mama-tude at 04:30 No comments:

Winging it and hoping for the best, is my general adopted position when it comes to the two thousand things that have to be done here in any one day. It largely works, kind of, with priorities being met and the less important things going on the neverending, non existing, list of “stuff to do tomorrow.

With a book deadline drawing ever closer, the usual deadlines to be met, a transition year musical on the horizon and upcoming both confirmation and communion, in addition to the other million and one things that go hand in hand with rearing a family we decided that we might need to give our whole winging it policy a bit of a helping hand – so my husband booked Monday off work.

Our internal walls were badly in need of a little TLC thanks to the combined artistic efforts of my 3 year old and 18 month old with a purple crayon and a red marker, so the plan was to tackle them, let me get some serious writing done and declutter some of huge amount of homeless junk that was gathering in every room of the house. We were a man and a woman on a mission. Our plan was to restore order to our gaff!

Rookie mistake. Making plans when you have children, is just tempting fate - and fate was weak. And so it came to pass that we spent Friday night in A&E waiting for my daughter, who had been referred by our G.P. with suspected appendicitis, to be assessed. Trooper that she generally is, meant that the first attending doctor viewed us suspiciously, wondering why she didn’t just take painkillers and stay at home. She didn’t seem to be in enough pain apparently. I explained how she had been screaming in agony earlier and that it was actually the G.P. who had sent us over and that she still was in a lot of pain, it was just relative. When the surgeon came to see her, she decided to admit for surgery in the morning. The consultant the next day, had her in theatre within ten minutes of his examination.

While I waited for my daughter to come out of theatre, a message arrived in my inbox. A preparatory photo, I like to call it. My husband, the responsible adult at home taking care of our other children, had thought rugby scrumming with my eight year old in our kitchen, you know the sort of place where there are hard tiles on the floor, was a good idea. Turns out he was wrong, and the eight year old had an impressive lump on his forehead and black eye to prove it. Some culpability was directed my eight year old’s way by the responsible adult – apparently, “he hadn’t bound properly”.

Naturally enough the weekend passed with intricate negotiations necessary to allow myself and my husband to take turns spending time with my daughter at hospital, without unleashing the full force of a Hogan invasion. The boys were fretting for their sister and were keen to see how she was doing but we had to keep messages to the video kind as her stitches wouldn’t have coped with the physical impact of their concern.

And as Monday, the day that we were supposed to take control, drew to a close, we realised that in terms of all that had to be done, we were now in a worse position than we were before, but our daughter was home, and all was well, and the eight year old’s shiner was every colour of the rainbow. Normality had returned to our household, there was lots to do. Winging it was best option. 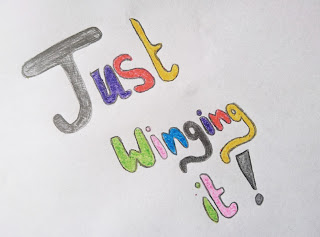 It's Friday night, you know the the feels, The weekend stretches out, It's time to relax, kick off our shoes, And "FREEDOM " we can shout, From all stresses of the week,
The things that drive us crazy,
The work and traffic and school runs,
There's no time to be lazy,
Tomorrow's not a working day,
No hectic morning to dread,
Cos Friday evening is our time
Once the kids have gone to bed
So what to do, and how to chill
Is what we now must ponder,
Sweet or fruity, red or white
Of which type am I fonder?
Then pour a glass and settle down,
Remote in hand securely,
Peppa banished for another day,
And grown-up programmes purely,
It's Friday evening and we own it
Relaxed, no we're not boring,
At 9 O'clock, I'm wine in hand
By ten you'll hear me snoring