It’s one of the times most dreaded by parents of toddlers and small children, but it comes to us all and can’t be avoided forever (although in fairness, my husband has done his best to try to). It’s the time you’ll need nerves of steel, the patience of a saint and shares in a kitchen roll company. It’s potty training time! Potty training is a wee and poo fest that the whole family can get involved in, so don’t let anyone off the hook! Here’s my 10 steps to help you with the task in hand and hopefully take some of the stress out of it.

1.     Firstly choose a time to start when you can be at home a little bit more.  If you have to run in and out on numerous occasions be it for school or activity collections, you’re going to make life more difficult for yourself. Plan in advance and discourage visitors if at all possible.  Distractions are not great at this time.

2.     Try to involve your child in the choosing of his/her potty and within reason go along with their choice.  My two year old son is the proud owner of a Princess Peppa Pig potty.  It has served us well! Also involve them in the purchase of big boy/big girl pants all the while reminding them of how grown up they’re becoming now that they won’t be wearing nappies anymore

3.     Allow your child to go without a nappy or pants on the first day you start.  They’ll be very aware of the absence of a nappy if they’re wearing nothing. The presence of pants however, can confuse them and make them forget they’re not wearing a nappy.  Make sure the potty is always visible and offer drinks frequently.  If possible let them watch a little programme that they really enjoy while sitting on the potty.  The idea here is to “catch” a wee in the potty by chance. This can take longer than you might originally anticipate because the security of the nappy is gone.  Don’t be afraid to use a little bribery here to encourage your toddler to stay seated on the potty.  You won’t have to do it all the time but for the first few times it might help. (Is that the mammy police I hear banging down my door??!!) . When your toddler does produce something, and if you have managed to keep him/her seated there for a while, it will most likely be just by chance.  This is when it’s time to make an enormous fuss.  Involve any other family members that are around, in the praise giving.  Your little one at least now has an idea as to what he/she is expected to do in the potty other than wear it on his/her head!

4.     Prepare to shadow your child everywhere, literally everywhere.  Small children get pretty bored with the whole potty thing very quickly and are quite likely to run off and pee somewhere else.  Move the potty from room to room.  If there are older siblings in the house ask them to help with the shadowing.  If your child starts to wee while not on the potty, just quickly lift them up and place them on the potty.  Anything in there is better than nothing and it reinforces that wees should be done in the potty.

5.     Throughout the day, keep saying to your toddler “Where do we do wees and poos?....In the potty” Any success should be heavily praised and misses met with a reminder that wees and poos are done in the potty.

6.     When going to bed place a pull up style nappy on your child but don’t refer to them as a nappy, just a variation on big boy pants. No one is expecting this to be dry in the morning, but it’s good to make the distinction between this and a nappy and it prepares the way for pulling up and down pants which will be introduced over the coming days.

7.     Start day two the same way.  Remove the pull up.  Leave the child without nappy or pants and keep the potty close at hand.  Day two can be met with more resistance but praise, gentle insistence and bribery should help.  Today your child might be aware after they have produced a wee and may well jump up to show you (or not, which is no problem either).  Again today shadowing is very important so as not to miss an opportunity.

8.     Later in day two (or day three if you feel your child is not ready) introduce the big boy/big girl pants.  You will be pretty much guaranteed an accident early on but that’s ok because the wet sensation will remind your little one of what happens if they don’t make it to the potty on time. Make sure someone is on hand at all times to help pulling up and down pants throughout the day and any success here should be met with a huge fuss.  This time your child has most likely been aware of what they were doing and has deliberately used the potty.

9.      Day three continues much the same as the previous day with hopefully a little more success.  No doubt however, you will have encountered resistance to pooing in the potty.  It’s important to make sure your little one doesn’t become constipated or holds on to their poo. If your child suggests that they need to poo, remove their pants again so that they can easily get to the potty at the very last minute. Again consider allowing your child to watch a favourite programme and encourage them to sit on the potty while they do.  Hopefully they’ll get so caught up in what they’re watching that they will produce! Leave the child without pants for a while to see if this helps.  If your little one becomes very distressed and still refuses to go, put a pull up style nappy on them (still referring to them as big boy or girl pants). Continue to encourage them to poo in the potty but don’t worry if they go in the pull up nappy instead.  Poo-ing in the potty always takes a little longer to master.

10.  By day four you should have proper idea as to how your child is getting on.  If they’re having less than a 50-60% success rate they’re probably not quite ready yet and you might be better off just leaving it for a few more weeks (even just 3 weeks can make an enormous difference).  Don’t worry that all your hard work will be wasted, it won’t.  Starting again a few weeks later should be easier, as your child will know what you and he/she are aiming for. Progress can often be much faster then.


Plenty of praise and encouragement are essential when potty training, as are constant reminders throughout the day and reaffirmations that big boys and girls do their wees and poos in the potty.  If things are going well, keep an eye on the night time pull ups.  Some children, day and night train at the same time.  If you’re one of the lucky parents whose child appears to be dry at night also, remove the pull up after about a week into potty training.  Remember to make sure your little one goes to the toilet before bed and don’t offer drinks too late in the evening. If your child however, is not dry in the morning when they wake, don’t worry, one step at a time. Night time dryness can be tackled later! 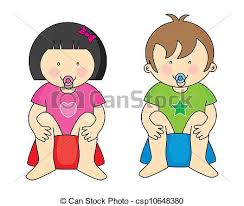