Car journeys ain't what they used to be.

Last week we set off on our family holiday to West Cork.  Packing took an eternity as I tried to locate 56 pairs of socks, jocks and pants, not to mention ordinary items of clothing, for the kids alone.  My own personal packing was done in about 5 minutes flat as the laden down car practically reversed out the driveway without me. With every available space in our red bus filled, and a bum on every seat, we set off on our marathon journey.

Car trips have taken on a new meaning since the children’s arrival.  Gone are the days of leisurely drives.  Nowadays it’s all about bribery and distraction and trying to make sure child number six doesn’t swipe child number seven’s soother en route!

We had set off in the evening time, after rush hour traffic and after the children had been fed their dinner.  The hope was that the younger children might doze on the way and we could carefully lift them into their beds when we arrived, where they would sleep peacefully for the entire night and wake up wholly refreshed the next morning, full of the joys of life.  That’s one of the fascinating wonders of parenthood.  Even though you know there isn’t a hope in hell of something happening you still dare to dream it might.

And so the early part of the journey began with my husband and I nodding in agreement that they were definitely getting tired and they’d most certainly drift off any moment now. And as the miles passed we knew they were definitely just about to go to sleep.  And after we stopped to let some of them go for a wee, we knew that that was obviously all that was keeping them awake and their now empty bladders would mean they’d be fast asleep before we knew it. The conversations directed at us from the back of the car however, suggested sleep wasn’t on their minds just yet.

“Do you know that beavers’ teeth keep growing?” the five year old informed me “and we better get there before midnight because that’s when the mud monsters come out”. “This city is upside down” the three year old exclaimed, in spite of the fact that there wasn’t a house to be seen, never mind a city! “I’ll really miss you when you die mum” the five year old continued, “I think you’ll probably be 109” “I think Ireland might be a planet sometimes” he added. This comment was enough to bring the seven and ten year olds in on the conversation. “Ireland is not a planet” they roared in unison. Undeterred by his brothers, the five year old continued “yes I think it is a planet, but I don’t think foxes are real”. The seven year old wasn’t entertaining this notion at all “of course they’re real” he said “I’ve seen one” “Yes, but he was probably trying to sneak up on you like a mud monster” the five year old replied. “I love Spiderman” said the three year old. “I’m going to be a daddy when I grow up” said the five year old, “not a mummy, because I have a willy, like Spiderman”. “I love Spiderman", said the three year old once again.

I attempted a little gentle persuasion to encourage the younger children in particular to go asleep and said that their daddy and I would carry them into bed once we arrived. “But we’re not tired” the five year old protested “we just have itchy eyelashes.”

Finally, at 11:30, we arrived, and all seven children were awake. As we left the cramped confines of the car, we realised, not for the first time in our lives, that we were very sadly deluded.  The kids had no intention whatsoever of going to sleep anytime soon.  They ran excitedly into the house we had rented, running up the stairs in heated debate over the sleeping arrangements.  It was a long car journey, but an even longer night...... 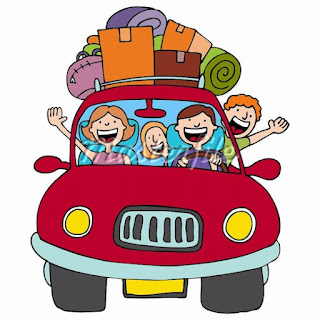