Sunday is not a weekday!

Halloween is coming so the geese aren’t getting fat quite yet but the kids are certainly getting grumpy – reason being, I still haven’t put up the Halloween decorations! Halloween is second probably only to Christmas, in terms of excitement, in this house, and the costume planning has been going on for many weeks now. At the moment it’s looking like several Spidermen will take up residence in this house on October 31st, assuming the motto “with great power comes great responsibility”. Bad guys needn't come here!

The plan originally this weekend gone was to decorate the house in a typical ghoulish and spooky manner with seasonal lights and scary doorbells thrown in for good effect.  Work, birthday parties and a mountain of laundry which even by Sunday night was still of Everest proportions put paid to my best laid plans. I won’t be forgiven in a hurry!

Saturday evening it was the turn of my 5 year old to celebrate his upcoming birthday with his classmates and he shared his party with two of his friends.  Once the curly haired one had got his head around the fact that he was still 5 at his 6th birthday party, he threw himself into the celebrations and had a ball with all of his buddies.  It was an evening party and as the shorter evenings are drawing more rapidly in, the partygoers were very excited by their belief that they were at a party when they “should be in bed”. The cuteness of the little dudes was almost too much to bear.

Once I arrived home, and it was actually bedtime for the younger ones, the questions started about the Halloween decorations.  “But you promised” I was told, when I had merely said “we’ll see” earlier in the week. That’s why as much as possible I try to stay off “autonod” – you never know what you could end up agreeing too.

Knowing I had a prior commitment on Sunday afternoon and that the rest of the day would undoubtedly be spent preparing for the week ahead, I tried to avoid any suggestion of the decorations going up then either.  And so it came to pass that the decorations didn’t go up and I spent the day washing uniforms (and a million and one other items of clothing).  The usual preparation for lunches and the search for single missing school shoes took place and I realised that Sunday has sneakily once again assumed its place as “preparation day” instead of day off.

There is one more weekend until the mid-term officially begins and I am determined to figure out a way to reclaim some of future Sundays anyway.  How - I have no idea yet, but I am intent on stopping Sunday from morphing into yet another work/school day.  In the meantime I have resorted, as all good parents do, to bribery, in the shape of Halloween buns, to buy me a little time to get sorted and to beg forgiveness for my blood oath swearing promise comment of “we’ll see”. 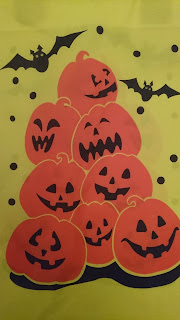