After a crazy busy week, we’ve had a Drama Feis, birthday party and chess tournament this weekend and now we’re rolling towards my son’s confirmation midweek and my daughter’s transition year musical every single evening.  All the usual mayhem has to be fit in, in between, and it will be, even if it’s accompanied by lots of grumbling about there not being enough hours in the day.

But on top of all that, and in spite of the excitement about the upcoming confirmation celebrations and musical staging (after months of practice), there’s an air of uncertainty that hangs over us. Our ancient, sixteen and a half year old dog, isn’t great.

I’ve written about him before and how he was getting old and slowing down hugely. He even looked as if he needed a touch of “just for dogs” around his greying temples. But now the discomforts and struggles of old age are really setting in. 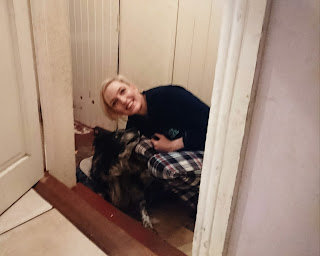 He’s almost completely blind, he has lost his hearing, and his sense of smell has rapidly diminished. His back legs are weak and stiff and he’s sleeping a lot.  It may be from the medication that he hates but that he has to take for his kidneys, which blood tests have revealed are deteriorating also. He has to change diet and drink more water, and the situation will be reviewed.

Rodney arrived six months before my daughter was born and has greeted each child with a sniff and a tail wag once they arrived home from hospital. Each new arrival saw him pushed further and further down the priority pecking order but it also brought him a new fan in due course, and a new heart bursting with love for him.

The older children are in denial. “He’ll be fine” they say, when they catch me watching him struggle, or sleeping yet again. They think this medication is going to solve it all. They don’t want to think of the alternative.

I hope they’re right, but he’s old, very old. We need to do the right thing for him.  I just wish I knew what that was. 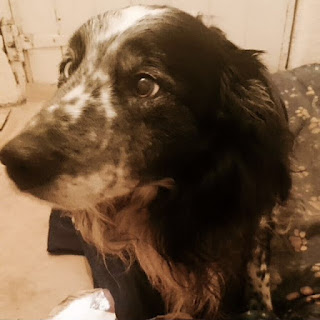