When the three year old tells you, he has news.....

The Easter holidays have been a very different affair this year. Normally when the children are off school, we try to go somewhere each day, just to get out the house.These trips can vary dramatically in terms and ranges of excitement, but once they know they’re going somewhere and once cabin fever isn’t allowed to set in, I tend to have more civilised children on my hands.

This Easter things had to be different. With barely any time left,  until my book manuscript needs to be submitted, everything is on a very tight schedule. The sort of schedule that hyper children and snot filled babies and threenagers, don’t care much for – and that “wingers of it” , like me, struggle with.

Spotting the rising chaos and recognising the challenges in hand, I managed to convince my mother to take three of the older boys for a few days. Younger children are more content with shorter outings and with a teenage daughter still here, I knew that we could manage the resulting change to dynamics a little more easily. Everyone stood to benefit, except my teenage daughter, according to her. My undying gratitude isn’t sufficient it seems, but we’re finding that feeding her coffee slices at random and frequent intervals over the course of the week is helping to cushion the blow.

With three of the boys missing, the house has seemed so much quieter. As child number five, stepped up to the role of “biggest boy in the house”, we realised that it’s a role that he quite enjoys. It hasn’t made much of a difference to child number 6 though. He knows the power of the dark side.  He remains very happy in his own personal role as "destroyer of things" and "family streaker".

This morning as my hubby loaded the car and prepared to take the remaining troops with him, to collect their brothers, a very “peachy” smelling three year old entered the dining room. As I sat at my laptop, typing away furiously, I heard the words that every mother dreads to hear – especially from the mouth of a threenager.

“I have some good news and some bad news, mum”, he said. I looked up in a panic and could see immediately that there had been an incident.

“And the bad?” I followed, swallowing in fear.

“This, eh, fell on my head” he said, producing a now completely empty bottle of conditioner from behind his back, and looking at me in staged shock with his green eyes aghast.

“But I smell really, really nice” he added for consolation.

Much later than planned, my husband left to collect my other children.

Week two should be interesting……. 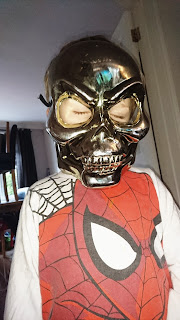