Facing up to things

I’ve mentioned before that I’m a “winging it” sort of gal. I have accepted, particularly as my numbers have grown, that much is out of my control, so, planning a little, and hoping for the best mostly, is a more realistic course of action when it comes to raising my children. This goes somewhat against my natural, more cautious nature, and my liking to “insure my insurance” so to speak, but I’ve found that it’s the most pragmatic approach to outnumberdom and beyond.

In some Spiderman movie or other, one I’ve seen countless times but during which, I have perfected the art of zoning out, the phrase “with great power comes great responsibility” is brandished about a bit. The same phrase could be tweaked to parenthood - “with great parenting  comes loads of washing, loads of worries, a need for a degree of omnipresence, lots of poo, no sleep, and a requirement to rethink your whole working life”. The tweaked version definitely applies to me. In between my winging it episodes, I’ve been adopting an "ostrich head in the sand" approach to my other job- but the tide is coming in.

And actually, it was great. It was great to see friends and to catch up with their news. It was great to have a cuppa (or two) in peace, and drink it while it was still hot. It was great to be Jen for that little while and focus fully on conversations rather than frantically realise that there had been no sound from the three year old for a while, which could only mean trouble.And it was great to discuss a return to work timeframe that suits all and to realise that for now, I can focus on the children and the upcoming book, which by the way, has a title - “The Real Mum’s Guide to Surviving Parenthood”.

So onwards and upwards. This ostrich has abandoned the sand. The return to my day job is in the pipeline. Juggling it all again will be a challenge. It will be chaotic, and it will be full on, but there’ll be coffee breaks and kindred spirits – and it’s a part of life. Unless of course, my lotto numbers come up in the meantime, then I may rethink things.

For now, we’re rolling towards the school holidays. Summer tests, school tours and a goodbye to primary school for another child, will fill the weeks ahead. I plan to make the most of these summer hols in particular, and enjoy every moment that I can, before the new, routine of old, takes over. 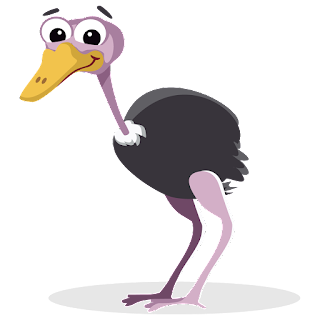