Our dog will be sixteen later this year. He was our first “baby” and is called Rodney (we’re huge Only Fools and Horses fans here!). He is a black and white border collie cross with two different colour eyes. He has an incredibly gentle nature which is tested on a daily basis by an over enthusiastic two year old who tries to use him as a horse and a five year old who tries to coax him into his bubble car. He greets the children excitedly every day when they go out the back to play with him and they in turn never fail to include him when asked about the number in our family – ten of course! They love to find him asleep in the morning time and take turns to give him a doggy treat or some warm milk on the colder nights before they go to bed themselves. He has worn birthday hats at their parties and has his own Christmas sock complete with embroidered name.  He is a much loved part of our family.

But he is old.  These days I can see that he doesn’t have the energy to play with the children as he did before. Now, after a comparatively short while running around with them, he escapes to his kennel to rest and, try as my two year old might, cannot be coaxed back out. His breathing is louder and more laboured, and he’s definitely more grey around the temples. He has been checked over by the vet and is in good health – for his age. Sometimes during the day when I see him lying in the sun, a little bit too relaxed, I bang on the window and disturb the poor fella, just to check……to check what I know is possibly not that far away.

Rodney has met every single one of our children as they came home from hospital. He accepted his fate, as over the years, he moved further and further down the pecking order. He has been through everything with us as a family, playing excitedly through good times and sitting quietly by our feet through the sad ones. My back garden looks as if we own as race horse rather than a dog and we curse him daily for that but my children have learned a lot through having a family pet. They have learned responsibility, compassion for animals and to always check where you play for dog poo first (definitely the worst part of having a dog!) They have also learned a special type of love.

While my older children are aware and fearful somewhat of Rodney’s advancing years and we’ve tried to prepare them for what might not be too far away, the younger kids remain oblivious.  I know when the day comes there will be heartbreak in this house, after all Rodders has been there their entire lives.  While it seems strange to be considering his obituary just yet, I feel compelled to try protect them from what’s coming, but I can’t. I can’t even bear to imagine him not being here myself. Seems daft, he is after all an animal, not a person, but he’s our Rodders, a plonker in his own right, but still our gorgeous black and white sixteen year old puppy dog. #hestilltakesmeforawalk #puppylove #mamatude 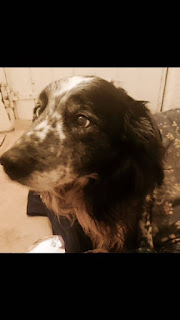