The mornings never quite go as I’d like, or hope.  While I have visions of six children and a baby in his highchair sitting around the breakfast table laughing gaily as they eat breakfast in a relaxed and cheery fashion the reality falls very short of this.  It takes five or six attempts to gently rouse my children from their deep slumber every school morning, the sort of deep slumber that never seems to occur at the weekend, before the fishwife in me leaps out and starts roarin, “GET UP NOW OR YOU’RE GOING TO BE LATE!” We’re not off to a good start. As the kids trundle down the stairs some more happily than others, there is shoving and shouts of “leave me alone” and “maaaaaaam he’s annoying me!” Meanwhile I’m rushing around the kitchen calling random children’s names to come and collect their cereal toast and juice.  My ever independent two year old insists “I do it mineself”. I can see what’s going to happen but I can’t stop it….

I mop up the orange juice as quickly as I can before he takes notions of “jumping up and down in muddy puddles” and move quickly to console my snot filled nose bubble blowing baby boy who is grizzling miserably in his high chair. Like his father, he is not a great patient! Next I move on to trying to cajole the troops up the stairs to clean their teeth before they head to school.  It is quite incredible the amount of distractions that can be encountered en route to the bathroom.  Several more fish wife impressions later they’re down the stairs and almost ready to leave the house.

My final morning battle begins and a disagreement ensues as to whether or not a coat is necessary.  My insistence it’s freezing is shot down as ridiculous, but, as I am mammy, they have to do what they’re told.  To the tune of “hurry, hurry hurry” most of the kids put on their coats and get ready to head out the door.  In scenes reminiscent of Home Alone 2 I do a head count and realise there’s someone missing.  It’s the curly haired one.  I turn around to find him coatless, standing about three feet away from the coat rack , holding his hand out.  “Why are you not wearing your coat” I say, in a less than calm fashion. “I’m getting it” he replies, “I’m just using the force”. I look at him for a few minutes incredulously…….…….before I burst out laughing.  Ah well, at least the tension is gone and tomorrow is Friday! #starwarsistakingovermylife #morningchaos #mamatude 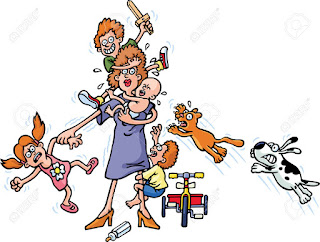