I can usually be seen huffing and puffing, pushing my big red double buggy which accommodates my two youngest children, most weekdays, as I head down to the school to collect my junior infant.  Yesterday my mam timed a visit perfectly with collection time, so I decided to leave my baby with her while I went to pick up my son. My two year old asked if he could come along and decided he wanted to walk. I thought it might be a good idea to give him a little practice at it, as I’m hoping to move him to a buggy board type thing soon.  The whole excursion reminded me why I usually restrain him!

1.       Two year olds are fast, very fast.  Within a micro second of having walked out the front door he was off, insisting there was no need to hold my hand because he was a big boy and there were no cars coming.  I ran most of the way to school in a sideways crab like fashion trying to near pin him alongside the wall while dodging parents and little girls on their scooters who had just left school.

2.       Two year olds are like magpies, well mine is anyway…except things don’t need to be shiny.  All manner of things can grab his attention.  One minute he was belting along the path on the way to collect his brother, the next minute he spotted dog poo, then a worm, then a paw patrol scooter.  The first two he stopped to examine, the last one made him turn in the opposite direction and run after the child on it!

3.       Two year olds are at the perfect height for parked car wing mirrors and older kids school bags. Both of which he managed to run into on his journey.

4.       Two year olds have an uncanny ability to choose the place of maximum potential audience for a meltdown.  After his collision with the second school bag of a dancing junior infant girl (their school finishes five minutes before my son’s school and is located directly beside it) and my insistence that he was holding my hand the rest of the way, I could sense one building. I started to wonder how many people around actually realised he was mine and, if it all kicked off, could I stand on the periphery with folded arms (once he was safely within the confines of the school playground of course) and pretend to look around for his mother.  Thankfully the crisis was averted -  he spotted a crow.

5.       Two year olds see. Two year olds want. Two year olds go and get. When we arrived at the school he spotted his big brother waiting in his line.  Normally the teacher allows the boys to go to the person collecting them one by one as she spots them.  My two year old bulldozed through the crowd of waiting parents and launched himself at his brother. Quickest pick up ever! 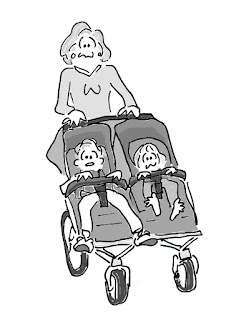