This week sees the annual occurrence that is sports day at my boys’ school. I had a vague recollection of it’s mention in the school newsletter a few weeks ago but watching my older lads running laps of the back garden while passing the dog’s toy to each other this weekend, in preparation for the relay and discovering my seven year old going through my husband’s tie drawer for a “nice colour” tie confirmed my suspicions that it was drawing ever closer. The countdown has begun and everyone is keeping their fingers crossed that the weather will stay fine.  Experienced parents have booked their time off work and one first time Junior Infant parent asked me earlier “is it that big a deal?” My reply was “Oh yes – sports day is a huge deal”

Love it or loathe is, and I’m really not sure what camp I’m in, sports day is a huge deal for the kids and for several of the parents too. Yes it’s great to see our children having fun with their friends and, if your child is any way sporty, maybe even win a medal or two. The “it’s all about taking part” line, however, does not wash with all of the children, particularly those past Senior Infants for whom a medal is no longer guaranteed, just for taking part.  In this house, with children of extremely mixed sporting ability I know there will be tears and sadness on the day for some of them, when best efforts will still leave zero chance of coming anywhere.  I know it could be viewed as a life lesson but, as an adult, I’m not likely to put myself in a competitive environment for something I know I am absolutely brutal at, and I can handle disappointment slightly better than a child.

And speaking of competitive environments, the highlight of the day for many there will be the parent’s race! You will see some, kitted out in their top notch sports gear and expensive running shoes, laughing off suggestions that it’s anything but a “bit of craic” but discreetly warming up on the sidelines as they cheer on their sons in their races.  Toned and tanned limbs give away any misconception that these parents are anything other than seasoned runners, and they mean business. Elsewhere, the more reluctant sportsmen and sportwomen among us will panically try to think of excuses not to take part. I already, am lamenting an absent pregnancy bump for different reasons to usual. It has crossed my mind to just stick a cushion up my dress, after all I’m always pregnant and I think most of the parents from the school have lost count at this stage.  Would anyone even be suspicious?

Failing that I’ll just have to hope the organisers turn the tables on those magnificent sporty parents and that the parent’s race involves an egg and spoon! #sportsdayworries #mamatude 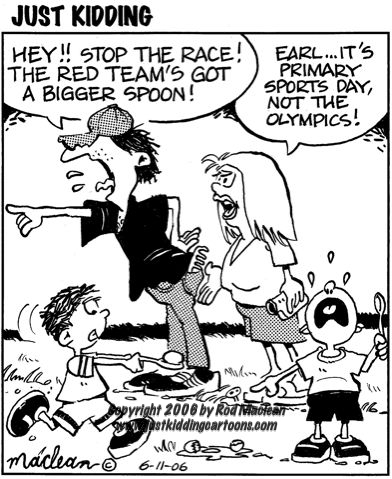