We try to eat dinner here as a family, as much as possible. The idea behind this is that we can all sit down together and have a chat about our day, and the added bonus is that I’m not standing over the cooker all evening as I would be, if meals were staggered. The disadvantage is, that in spite of adequate snacks, my kids are fading by 4:30, declaring their starvation and in whiny monotone drawn out voices ask me constantly “how much loooonnnngggger to dinnnnerrrr”. The constant questions start to grate after a while and I find myself watching the clock until my husband walks in the door when I thoughtfully suggest that they go and annoy their father instead while I dish up dinner.

I usually call the older kids to set the table and my reluctant helpers argue over who is to bring in the knives and who is to bring in the forks.  It appears in my children’s minds that this should be a two person job.  All the while, we try to keep the table setting operation a secret from my only enthusiastic helper, my “not yet three” year old. Any help from that terror, involves a massive clean up and a larger than usual dinner for the dog! Once dinner is served, at least two drinks have been knocked over and a row has taken place over who is drinking from which colour cup, we get down to the nitty gritty of eating and chatting.

The randomness of my children’s thoughts, feelings and resulting conversations never fails to amaze me. Yesterday at dinner the “not yet three” year old announced that he thought he had a chicken in his willy – and it was really making him need a wee. The five year old attempted to establish and confirm the fact that if his father and I died, his sister would be his new mammy and she’d probably need to marry her twelve year old brother because they’d need a dad too. The ten year old announced that he and his friends had set up a new band called “chicken in sticks” in which he is the lead singer. One friend played the tambourine, another the violin.  Obviously they needed security too, ahead of their destined fame , so, two nine year olds had been recruited as "heavies". The fifteen year old still gagging from the suggestion that she would marry her twelve year old brother nearly choked with laughter on hearing of her ten year old brother’s new musical direction. Too cool to be scoffed at, he continued to describe their musical genre – “ we do a bit of rock , a bit of rap, bit of oprah (no that’s not a spelling error, he was talking the Winfrey, while obviously referencing the classical). Apparently, we were informed, if they get really good, they might be allowed to perform at assembly.

In the meantime the “not yet three” year old returned from the bathroom and confirmed he was actually poulty free, but he thinks he might have missed the toilet bowl a bit. Dinner can be a very informative experience here…..#familydinner #mamatude 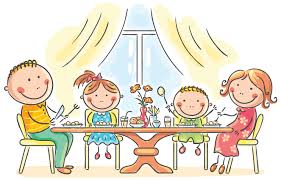