What's that in the toilet?

Over the years my children have put various items down our toilet.  Mobile phones, plastic bath ducks, Iggle Piggle and one of my husband’s ties (which was used as a fishing rod) have all met their watery end at the bottom of our lavatory. We had a new one today though.

There was a lot of activity going on in our bathroom this morning and not just the usual meeting of minds that regularly takes place there, when one of my younger kids needs to do a poo. In a house where most of the children have no mute button, silence is always treated with particular suspicion. Upon further investigation it appeared that there was every reason to be suspicious.  My five and two year olds were found examining the toilet bowl where some mushy type something or other was floating in the water. “What’s going on?” I asked “Whats that in the toilet?” Two guilty heads looked at each other. “It’s a breakfast waffle” my five year old replied. “And how did it get there?” I asked. “It popped out of the toaster and landed there” he said. “So it popped out of the toaster, flew up the stairs and landed in the toilet? I asked. “Yep” he replied nodding his curly head in earnest honesty. “It’s in the toilet” my two year old added, just in case I wasn’t clear.

“Don’t worry mammy” the five year old said as I muttered in disgust “I got most of it out with daddy’s toothbrush”….... #supposeIbetterreplacethattoothbrush #silenceequalstrouble #mamatude 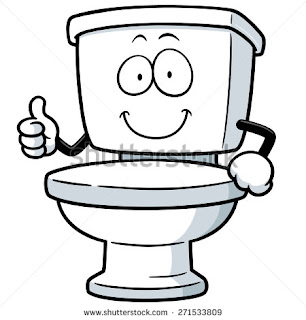