A reminder of what's important

I had known since the week before, that last week was going to be a particularly busy one. What I didn’t wholly appreciate, was that it would also be a week in which I would be reminded once again about the things that are truly important. The things that are so often forgotten about in the daily chaos and mayhem that is life.

As anticipated, my Spiderman loving, Power Ranger costume wearing, Iron-man beaker bearing, three year old kicked up quite the stink when Monday morning came around and it was time to return to Montessori. Whole-hearted declarations of “I’m not going to school” were reiterated at two minute intervals and my Houdini-like escape artist unbuckled himself from his car seat six times before we finally managed to get out of the driveway.  Prior to this, the usual morning madness had run it’s course as “tired and emotional” children ate breakfast at a snail’s pace and climbed the stairs to clean their teeth at an even slower one. Even the most falsified, cheeriest tones of encouragement and persuasion could not speed my reluctant troops up!

Once they had gone to school and I had finally managed to reverse out of the driveway with my superhero strapped into his car-seat, while his adoring baby brother watched on in amusement and hopefully without any intent of mimicking his behaviour in the future, we set off to montessori.  As the declarations continued I decided there was only one fail-proof way to tackle the situation -bribery!
I knew that once my “not very shy” little dude gave montessori a chance he would be as happy as that proverbial pig.  I also knew that my “not very shy” little dude is quite possibly the most stubborn child of my lot and so convincing him to give it a chance was not going to be easy. “Oh you are such a big boy now” I told him. “You’re going to have so much fun with your new friends.” Still, he gave me nothing. “In fact”, I added, “I’m so proud of you for starting at montessori that I think I’ll have to have a present for you when you come home”. Finally I had his full attention. As I continued with my explanation that it was only right he should get a present to celebrate starting at big school, my three year old super hero, unbuckled himself again and started to put his Spiderman bag on his back. “Let’s go mum” he said. And we were off.

Thankfully the rest of the week went pretty smoothly, montessori wise, and the €1.49 that I spent on a Spiderman bubble wand proved to be my soundest financial investment of the week (still no sign of my lotto numbers coming up!) As expected the “not so shy” little dude quite enjoyed the company of his peers and while he was always very happy to see me at collection time, he was content enough going to school each morning. A new week, of course will test this once again.

The other kids meanwhile, plodded along through the school week - literally plodded every step of the way, including through homework.  By Tuesday night I thought I would lose what little of my sanity was left, after another afternoon of battling with my kids to just sit down and focus.  In fairness, no one had an excessive amount of homework but no one had an excessive amount of focus either. And so it continued into Wednesday, and I wondered how we were going to manage next week when after-school activities came back onto the scene again.

Thursday was a different affair.  Thursday morning, before daybreak, I set off for the airport to travel to England for a funeral.  My aunt had a passed away after a long illness, still a young woman, and had left a devastated family behind.

Cousins and sisters all met at the airport and chatted ahead of our travels and it was a reunion of sorts when we reached England. As we have all grown older and my grandparents have passed on I have realised that I only see certain family members at occasions like this, or weddings. Life operates at a hundred miles an hour and everyone concedes there’s just not enough time, and yet in our hectic schedules we can all make enough time for an occasion like this.

The funeral was a heart-breaking affair as we remembered a wonderful woman, who had had such a difficult last few years. I watched my mother, her sisters and her brother broken by the loss of a little sister. I watched them support each other and experience a grief unique only to siblings who grew up together. A time before us, a time of shared lives.

The world keeps turning and life goes on. Thursday was a reminder of the importance of our own unique families, whatever the dynamic. We grow up together, we experience things together and we’re hopefully there for each other to offer support in difficult times. It was also a reminder that life is for living and not just existing, bulldozing through the mundane.  There are things in life that have to be done, but there are things that can wait. Sometimes it’s important to reassess priorities.

As John Lennon said “life is what happens while you’re busy making other plans”.... 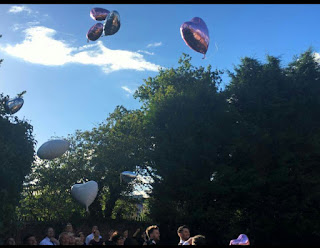