A weekend break after such a short school week is not conducive to coaxing child number six back to Montessori tomorrow.  I have already been informed, in no uncertain terms, by my headstrong threenager, that he won’t be going to Montessori again. In spite of leaving on Friday, full of the joys of life and informing me that he had so much fun, he has decided now that its Sunday, that he hates it. Monday morning looks like it will be quite the battlefield.

Child number one, is quite keen to return to school tomorrow.  Having missed her transition year camping trip due to a horrendous dose of tonsillitis, she is fearful of missing any more of her “year off”. She is also afraid that if she spends any more time at home recuperating, I might find some jobs for her to do – especially now that I’ve decided it’s time the older kids pulled their weight a bit!

Child number two has always been reluctant to go to school, so no change there come tomorrow morning, while child number three and four alike, are still in the honeymoon phase of the new school year. Child number five, my self-declared favourite, is thoroughly enjoying the fact that he is now in “seniors” and has plenty of willing participants for superhero games come yard time.

As part of my annual new school year resolutions that never make it past the second week of September, I am trying my best to “be at one” with Sunday. Sunday is supposed to be a day of rest- actually I can’t even type that without laughing, so let me rephrase - a day of slightly less stress than a weekday. This week is due to be a particularly crazy one but I have decided not to be fazed by it.  I can rant at the time.  There is no point in starting early.

Approaching my crazy week in a zen-like fashion that is totally unrepresentative of who I am, I have decided that I will not be perturbed by homework. I will find a way to be at the school early each morning with my approximately twenty five children to sign up for afterschool activities which are allocated on a strictly first come first served basis. I will remain calm when Spiderman insists he wants to be the Incredible Hulk, no Ironman, no Batman, no Spiderman again, just as we’re about to leave the house to collect his big brother. I will not lose the plot when I am handed a note at 8:15 a.m on Wednesday for something that needs to be brought in that day, but was never mentioned to me before.

And so full of good intentions, positive vibes and inner peace, I will finish typing and load the washing machine – again - for the fifth time today. Today is Sunday.  It is a day of slightly less stress. 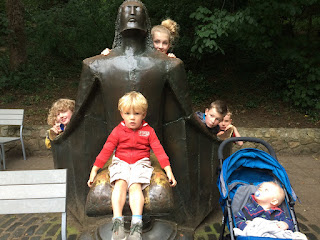 Email ThisBlogThis!Share to TwitterShare to FacebookShare to Pinterest
Labels: back to school, mum of seven, parenting challenges, patience, quality time