Exhausted-ese - the language of a tired mum.

If “motherese” is the term used to describe the way in which a mother speaks to her child , then “absolutely exhausted-ese” might be the term of choice to describe the complete lack of ability to string a sentence together accurately or even use the correct word or name in reference,

My mother told me that I never slept much as a baby and apparently himself wasn’t a great sleeper either, but never in wildest nightmares did I imagine that ALL seven of them would subject me to torturous sleep deprivation.

There are many reasons that I am grateful to be a woman.  Make- up is one of them.  It covers a multitude and disguises the rest. It cannot however, cover up my lack of precision when I try to make a simple request but just can’t get the words out.  At this stage I’m waaaaaay past just the whole just calling the kids the wrong names, though I haven’t yet managed to overcome my irritation when they don’t know who I mean. My exhausted train of thought means that I regularly ask children to put new toilet rolls in the chest freezer, hair gel in the linen press and dog food in the playroom.

I have realised now that it has become a very significant issue.  The thing that has alerted me to this fact is…that the kids have started to notice……and …..question if what I said is actually what I mean!

To appreciate the seriousness of the situation, you would also have to appreciate that my children’s minds are usually on much more important things, such as who could win a battle between Batman’s sidekick Robin and Spiderman or whatever the latest teenage crisis is such as “how much contouring is too much”.  These days however, they no longer blindly follow instruction (after the fourth time of asking) but openly question and even laugh sometimes at the now recognised ridiculousness of my requests.

Yesterday was one such example when I heard the seven and ten year old laugh at my insistence that they go upstairs and put their pyjamas on immediately because we needed to leave shortly for Kung Fu. “Pyjamas” the ten year old questioned. “Yes” I reiterated, “now hurry up or we’ll be late and you’ll have to do press ups”. The seven year old laughed again and said “Don’t you mean Kung Fu uniform mam?” “I think we’d be made do press ups if we turned up in our pyjamas too” the ten year old added. “What? Of course I mean Kung Fu uniforms” I quickly mumbled.

I was overcome by shock. This was so out of character for my children. They had actually listened to me.  They had actually heard what I had said – even if it was nonsense. They had used their initiative and recognised the appropriate attire necessary for the task in hand. Had they not proceeded then to argue and batter each other over a pair of shin guards, it would have been a perfect moment.

Inconsistency, however, still prevails and when I discovered the new tube of toothpaste in the little boys wardrobe later that evening, I began to appreciate that I need desperately to get more sleep and unlearn this language of exhausted-ese. Otherwise, the next thing I might find is the baby in the dog’s kennel.

Now, how to convince the twelve month old of the merits of sleep……. 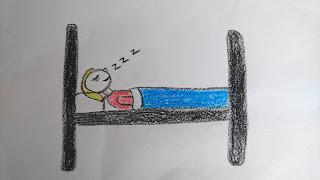