One of those nights!

My baby is a terrible sleeper, I mean absolutely shockingly bad and the last few months have involved me functioning in a sleep deprived stupor with several moments of confused dreams versus reality. In fairness none of his older siblings slept either as babies so I can’t claim that I didn’t know what I was getting into but that doesn’t make it any easier when you’re going through the torture that is sleep deprivation. Yesterday, exhaustion was really catching up with me so I set myself the target of hitting the sack before midnight and preferably by 10:30.  That is no mean feat in this house! The baby is the only one who tends to wake up at night here, except for bouts of illness, so with no homework or school to get ready for the next day, there was never a better opportunity to catch up (a little bit anyway), on much longed for sleep .

9:00 p.m. My teenage daughter suddenly decides she needs to know all about quadratic equations, now, not tomorrow or the next day, but at this very moment in time.  Her life practically depends on it (I suspect a maths test is looming that I haven’t been told about – it couldn’t possibly be the Junior Cert because that’s a whole five weeks away!)
10:00 p.m. The two year old comes down the stairs.  He has decided it’s morning time
10:15 p.m The five year old calls to say the two year old is in his bed…..again
10:30 p.m. The five year old comes down the stairs….just because
10:45 p.m The nine year old comes down the stairs because he has a cramp behind his knee
11:00 p.m The eleven year old comes down the stairs to remind me that I have to sign the note for for his school tour (have I mentioned my primary schoolers have no school this week)
11:30 p.m. Husband goes to feed the dog, forgets he has already put the alarm on, opens the back door, baby awake!
12:15 a.m  baby fed , changed and finally settled, I fall into bed exhausted
1:10 a.m baby awake again, wants a quick feed and cuddle
2:25 a.m. Five year old comes into the room.  Says he has been burping a lot and needed to say excuse me. Apparently he couldn’t just say it to himself. He needed someone to hear it or else it would be bad manners. I look at him bleary eyed. Its 2:25 in the morning, far too early or late to consider the whole “if a tree falls in the wood and there’s no one to hear it” philosophy
2:30 a.m Baby wakes….. repeat 1:10 a.m.
3:00 a.m Two year old appears convinced the Gruffalo is after him
3:25 a.m Two year old reappears to tell us he loves us, and he loves food and he loves the fridge apparently. He also thinks he might need a wee
3:45 a.m. Baby wakes , just to check I’m still about
4:30 a.m Nine year old appears, cramp behind his knee again and he wonders if we know whether or not he will be going to his friends for a sleepover this week
4:45  a.m. Baby wakes – weak with the hunger!
5:30 a.m. Baby wakes to check he hasn’t been abandoned
6:25 a.m. I wake to hear the two year old singing in his bed “We dig for diamonds, we dig for gold”, a song from Ben and Holly ………and a new day begins! 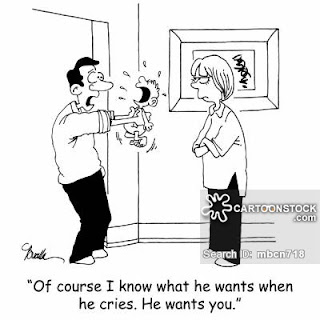